DISCLAIMER:  This is in no way intended to be a complete description of all the different issues regarding crotch fit.  It is ONLY a discussion of my own personal journey and the conclusions I have come to.  I hope it will help you if you are new at sewing.  It sure would have helped me when I was a new sewer.

First, you need to watch these two videos so you can learn HOW to make your "fish bowl" (as Phylly calls it).  You cannot make the corrections to your pants pattern if you don't have the "fish bowl".

The book referenced in the video is:  Fitting & Pattern Alteration by Elizabeth Liechty, Judith Rasband and Della Pottberg-Steineckert

As I understand it, this is a college course book.  I know Lorraine Henry sells it at her shows.  You can google it to find other sources.  Phylly and I both have it, and we HIGHLY recommend it.  Warning:  It is about $100.

This tutorial teaches you about the crotch curve information in this book as I have applied it to my patterns.  There is MUCH, MUCH more about every kind of alteration and correction imagineable in the book.

Now, you need to draw your bowls -- hopefully, you have a bendy curve.  By the way, you have to put the three rubberbands on the curve yourself -- they don't come with it.

Here is a picture of my bowl next to Phylly's: 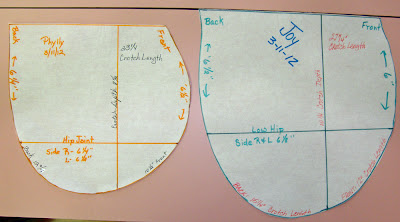 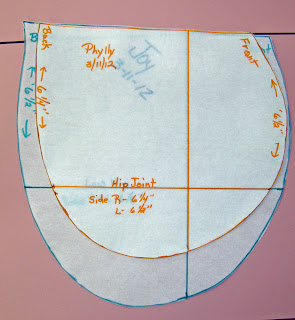 Here is a picture of Phylly's bowl ON TOP of my bowl.  This should show you right away why there is a crotch curve issue in the first place.  How on earth could we use the same crotch curve that comes in the pattern?  Even if it happened to fit one of us, it would not fit the other one.
I would like to tell you Sure-Fit Design owners that Glenda's way of measuring crotch length with the add 1, subtract 1 system, comes quite close to a very good fit.  I wouldn't even mess with this unless your bottom drops below your crotch, or your back crotch is quite long like mine is.  It is easy to get depth and length mixed together and not know which to fix.

Following is a picture of a brand new pants pattern BEFORE making any corrections to it.  (Note:  This has nothing to do with Sure-Fit Designs, but I could use an SFD blueprint and correct it the same way.)

I have my crotch point lined up with the pattern's crotch point.  The first thing I notice is how much higher the waist is than mine.  If I just made this pattern up, I wouldn't know it I needed to fix the crotch DEPTH or the LENGTH or BOTH.  I would know, however, that they did NOT fit right. 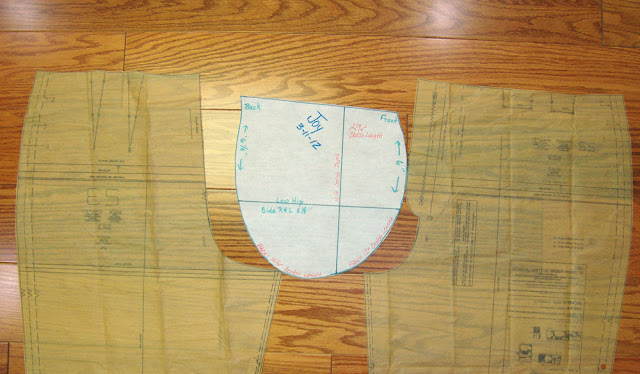 I can either shorten the pattern now, or just draw the hipline on it to fix the crotch curve, and shorten the depth later.  I think I did both.

In this picture, notice how the hipline of the FRONT and the BACK of the paper pattern line exactly up with my BOWL hipline.  Also, the crotch line lines up all the way across.  Notice how my bottom drops LOWER than the crotch line.  I have heard Peggy Sagers say this is impossible, but there's the proof right there.  It is very common AND a very good reason crotch curves have to be adjusted! 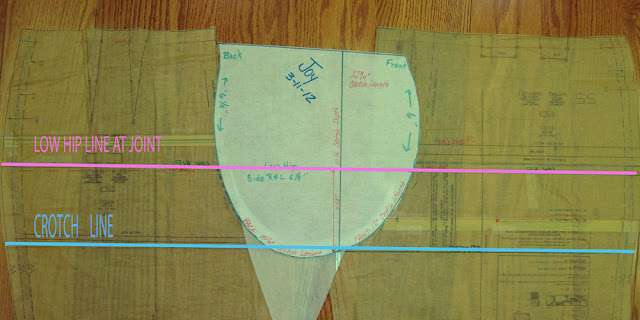 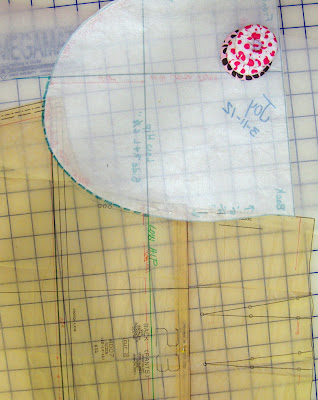 This pictures shows my bowl lined up with the crotch line and the low hip line of the BACK pattern piece.  I have matched the hip line of my bowl at the STITCHING line at the hip line on the pattern.

HOW did I find the hip line on the pattern????  This was a real issue for me, but so simple.  MEASURE IT there on your bowl.  Taaa Daaaa!!!!

Notice too that the crotch point on my bowl -- NOT the bottom of the bowl -- lines up with the crotch line on the paper pattern.

You can see the blue dashed line where I simply traced the bottom of my bowl from the hip line to MY crotch point (where the rubber band was).

The book shows several ways to trim the pattern and push it and pull it and slide it and ......  I just traced my shape. 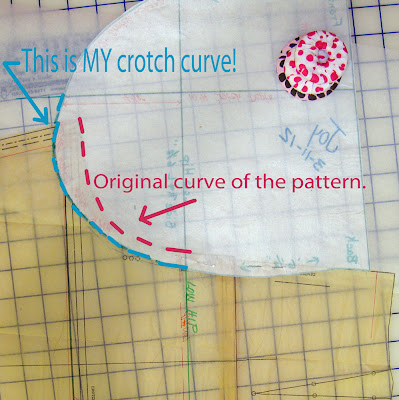 Notice in this picture:

The PINK original crotch curve of the paper pattern.

The BLUE crotch curve made with my bowl. 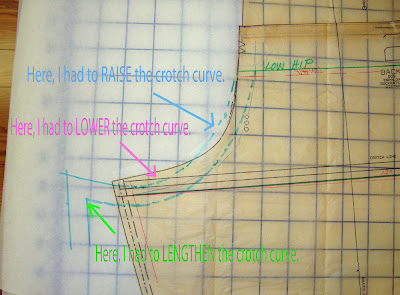 Notice how much LENGTH (green) I had to add to the back crotch.

Notice how my bottom drops BELOW the crotchline.

Below is ME in between the CORRECTED paper pattern pieces.  You can see I will fit into that curve exactly right.  It turned out that there was not much of a correction at all on the front pattern piece, so I haven't shown it with changes.  Notice that I simply tapered my new extended BACK CROTCH POINT down to about the knee level, and I curved it in a bit. 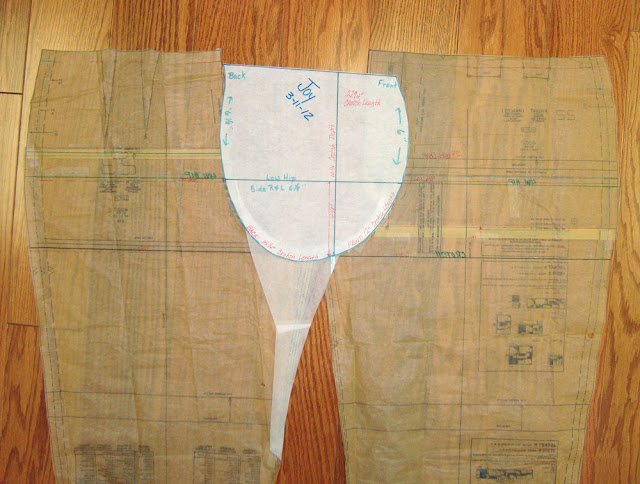 Make very sure you put your inseams together as though you were going to sew your pants together.  The front is probably not going to fit the back anymore after that correction.  You will have to lower or raise the crotch point on the front so it will sew to the back.  In this case, it was only about 1/2" difference.  Begin by matching the seams at the BOTTOM HEM edge of the pant and match them going up to the crotch.  You will see right away if you need to make an adjustment.

I hope I didn't make this sound too complicated.  It was VERY complicated for me for a long time.  It helps so very much to have a sewing buddy to swap thoughts with.  You know what they say:  Two heads are better than one!

TO COMMENT: Scroll down a bit and find the word "comments". It may have a number in front of it. Click on it, and you will be able to leave a somment. I realize you have to choose Google, Facebook or Anonymous or ? to post a comment. If you choose "Anonymous", you will be able to post a comment, but please leave your first name in your comment so I know you aren't a machine.

I do enjoy receiving comments, especially, when they are to answer my questions!

Joyree
I am a semi-retired business owner-secretary-bookkeeper. My husband still works all the time. I spend a lot of time sewing these days and reading blogs of others who sew.

Underneath each day's post you will see the word "Comments". It may have a number in front of it like this "2 Comments". Click on that, and it will take you to a comment box. If the choices of accounts don't make sense, choose "Anonymous". Just put your first name in the post please so I'll know who you are.